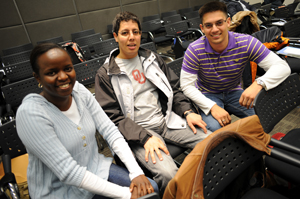 Learning curve: Cosmology students Anne Marie Nzioki, Hassan Bourhrous and Sean February were some of the students who rubbed shoulders with thinkers in the field.

Points of view and accents were equally wide-ranging when international scholars met at Beyond the Concordance Model, a workshop hosted by UCT's Astrophysics, Cosmology and Gravity Centre at the Stellenbosch Institute for Advanced Studies at the end of August.

The centre's co-director, Professor Peter Dunsby, had gathered a roomful of some of the brightest minds in cosmology to pitch (from an assortment of approaches and schools of thought) alternative models to what's known as concordance, or the standard model of cosmology. This model starts off with the Big Bang but is now in flux as cosmologists and astronomers struggle with a universe that is made up primarily (all of 95%, by some calculations) of two forms of matter that fit snugly into models and observations but which no-one has been able to explain or identify - dark energy and dark matter.

Not surprisingly, not everyone swears by this model. But as these dissenters are usually a muffled fringe, Dunsby thought it was time for them to air their views.

"I've deliberately brought together people who are looking at challenging and questioning some of the basic assumptions and tenets of the standard model," he says.

So, over the five days of the gathering, more than 20 speakers offered some cutting-edge models - involving modified gravity, inhomogeneous cosmologies, backreaction and other alternatives - that could explain an expanding universe without dark energy. That raises questions about some of the fundamentals that graduate students in the centre have been taking for granted for many years.

"In terms of solving the equations that describe the evolution of the universe, we like it," says doctoral student Sean February, "but in terms of 'does it make sense?', no."

The workshop, added fellow doctoral student Anne Marie Nzioki, is a helpful learning curve. "This is very non-standard, but it helps you understand the standard model better," she says.

The one who got perhaps the biggest kick out of the meeting was master's student Hassan Bourhrous. "I've never been happy with the standard model or anything standard," he jokes, "and if it turns out to be wrong, we learn from it."

There would be no consensus or new model emerging from the workshop, explains Dunsby, but it would perhaps lay the groundwork for a viable alternative. Or at least get cosmologists thinking along new lines.

"So if we go away with a sense," said Dunsby a few days into the meeting, "of what the different competing alternatives are and what the problems are that we have to address, and if we can walk away with the formation of an international research network addressing these issues, that would be very important."