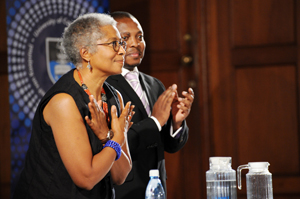 "Steve Biko was an inspiration because he fully understood that the foundation of any true liberation was self love."

Delivering the 11th Steve Biko Memorial Lecture to a packed Jameson Hall on 9 September, Pulitzer Prize-winning author Professor Alice Walker drew on her poetry, personal history and the inspirational role of the South African liberation struggle to disenfranchised people around the world.

The title of Walker's lecture, Coming to See You Since I was Five Years Old: An American poet's connection to the South African soul, refers to her memory of learning the future South African national anthem from her eldest sister, a college student at the time.

"We were the only children who were taught this song in our highly segregated, deep Southern town in Georgia," said Walker, "and Nkosi Sikelel' iAfrika has stayed with me for the last 60 years.

"I have taken you, your spirit, the spirit of Steve Biko, of Winnie Mandela, of Nelson Mandela, of the children of Sharpeville, completely, into the very marrow of my bones. In our own struggles to end American apartheid, you have been with us."

But Walker's tone was angry and cheerless when she spoke about present-day South Africa, its corruption, crime, violence and specifically, its president.

"It is with so much sadness that one reads about South Africa in recent news. I am unable to comprehend how you now have a president who has three wives and 20-odd children. A president who has been accused of atrocious acts, and who seems to have little of the restraint in his personal life that would mean dignity and respect accorded to his people.

"Was Mandela's decades of incarceration and Biko's torture and death for this?"

People have forgotten their interconnectedness and worth, said Walker, and South Africa's leaders have shown themselves to be obsolete.

Walker argued that we must therefore learn to lead ourselves, re-embrace conscience-raising poetry, and lose our attachments to gadgets that drown out our inner voice.

"About this, Biko was right," said Walker. "Once your consciousness changes, so does your existence."

Introducing Walker was vice-chancellor Dr Max Price, who apologised to those celebrating Eid ul-Fitr and Rosh Hashanah for the lecture's timing.

"We try to hold the lecture very close to the anniversary of the death of Steve Biko (12 September). I ask your apology, but I also want to take the opportunity to wish our colleagues a healthy and successful year ahead," said Price.

View the video of the lecture.