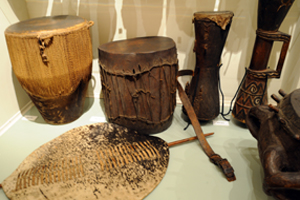 Past sounds: Some of the restored traditional musical instruments in the Kirby collection.

Renowned as the most significant archive of traditional Southern African musical instruments in the world, the Percival R Kirby Collection was re-launched at a celebratory function at UCT's South African College of Music (SACM) on 2 September.

The re-opening of the collection to the public forms part of the SACM's centenary celebrations, and is set to draw researchers and students to the school from around the world to study the one-of-a-kind archive.

Umrhubhe and uhadi bows, umtshingo flutes, Zambian drums chiselled out of tree trunks, a tortoise-shell guimbri lute from Morocco, and a Hausa 'talking drum' are just some of the many instruments in the collection, comprising about 600 pieces, some dating back to as far as the late 1800s.

Speaking at the launch, Michael Nixon, head of Ethnomusicology and African Music at the SACM and curator of the Kirby collection, described the archive as a work in progress, fertile grounds for research.

"We have now reached the point in the conservation and restoration process that allows us to use the instruments as they should be. Because of its national heritage status, UCT has an obligation to maintain the collection and open it up to the public." 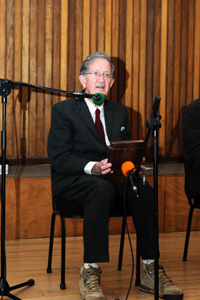 The arduous restoration was made possible by a grant worth over R2 million from the National Lottery Distribution Trust Fund. Many of the instruments had suffered physical degradation, mainly due to the lack of facilities for keeping the assemblage in a proper humidity-controlled environment.

"The mould was thick, the floor had rotted," explained Nixon. "We had to start from the outside of the building - with the services of a restoration architect - and work our way in."

The launch concluded with a demonstration of the instruments at work by ethnomusicologist Professor Andrew Tracey (pictured on the left).

"The sounds are the real artefacts," said Tracey. "The instruments are just a means to reach the sounds. But when the last one goes, that will be it - the thread will be broken."

"Fortunately, we can catch the last whiffs of tradition and history in the Kirby Collection."