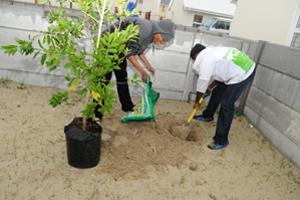 Rivalry between UCT and Stellenbosch University (SU) was put aside when students from the two institutions braved freezing rain and worked hand-to-hand to plant trees in a new Mitchell's Plain suburb.

Residents of Morgen's Village in New Portlands were taken by pleasant surprise when 150 students arrived early on 28 August to plant about 300 indigenous trees, one on each property. The project was a collaboration between the Students' Representative Councils from both institutions and the United Nations Association of South Africa, while UCT's Green Campus Initiative (GCI), SU's EcoMaties Sustainability Society, and the two campuses' Habitat for Humanity societies also lent a hand.

The aim of the initiative was to help spruce up the newly-built housing development, and raise awareness of the United Nations' Millennium Development Goals and the environmental benefits of planting trees. Organisers raised over R30 000 for the trees.

Richard Parker of GCI notes that the rain on the day posed some challenges but also saved them from watering the trees. In the end, the mission was accomplished and residents were grateful.

"Doing the final rounds, it was amazing to see a tree at each house, and the impact it made on the neighbourhood," says Parker.

The SRC's Erik de Ridder says that the project was in line with the body's strategic goal to address the issue of environmentalism, and contributed to its aim to be carbon-neutral. He added that EcoMaties will be producing pamphlets for the community on how to take care of the tree.

"Given that almost no gardens exist, this is a crucial component if the initiative is to have a lasting impact," he explains.