Brainy neurosurgery at the foot of Africa 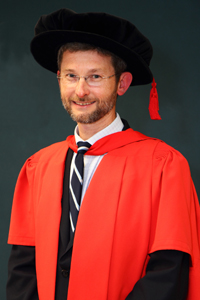 A cut above: As Prof Graham Fieggen showed, South African neurosurgeons have been pushing the envelope in their field.

Even in a field as technically and technologically demanding as neurosurgery and where most innovations hail from Europe and the US, South Africans are blazing new paths.

That's not too startling, said Professor Graham Fieggen, the Helen and Morris Mauerberger Professor of Neurosurgery in UCT's Division of Neurosurgery, when he delivered his inaugural address in August. As Fieggen indicated in his lecture, Brain Matters: Neurosurgery in a developing country, the earliest records of surgery on the brain were found in North Africa. These are 10 000-year-old skulls bearing the marks of trephination - in which holes are made in the skull of a living person - and the papyrus on which Imhotep, the Egyptian physician who lived in the 27th century BC, recorded injuries of the spine and head. In the case of the latter, Imhotep, considered by some as possibly the greatest of all physicians, would prescribe that no action be taken on the grounds that they would be futile.

Not so the treatments of Cape Town neurosurgeons at Groote Schuur and the Red Cross Children's Hospitals in recent years, showed Fieggen.

Take for example their work in the area of traumatic brain surgery (TBI), very common in South Africa. "It is not widely appreciated that trauma is the number one cause of death for South Africans between the ages of four and 18, and more than half of these deaths are due to brain injury," said Fieggen. "One can summarise this data in the simple but appalling statement that the risk for a South African child to die from a head injury is eight times that of his counterpart in the USA."

But with some clinical and management interventions, Fieggen reported, Red Cross has reduced its mortality rates from TBI, which stood at over 40% in the 1990s, to around 25% in 2005 and, today, 10%. They pulled off this remarkable feat through three innovations - the practice of the once-controversial technique of decompressive craniectomy, where surgeons remove part of the skulls to make space for a swelling brain; consolidating the various intensive-care units at the hospital into a single unit; and, finally, by introducing multimodal monitoring of the brain, ie monitoring the recovery of an injured brain using a number of indicators rather than just one.

So, too, South African neurosurgeons at these hospitals have been making breakthroughs in the treatment of epilepsy through hemispherectomies, where an entire hemisphere of the brain is removed or disconnected. And in the treatment of spasticity, which afflicts children with cerebral palsy, they've recorded notable successes with a procedure known as selective dorsal rhizotomy, where selected nerve roots in the spinal cord are severed.

These and other examples illustrate the role that neurosurgeons can and do play in Africa, said Fieggen. But there are obstacles - the shortage of trained neurosurgeons, poor infrastructure, linguistic and cultural barriers, and the lack of research funding among them. On the other hand, UCT and other South African institutions are doing their bit to swell the ranks of neurosurgeons on the continent by providing training to doctors from other countries, and scientists are developing technology that is appropriate to conditions on the continent.

In the Western Cape and at UCT, things are also looking up, said Fieggen. The province boasts a very functional healthcare system and a number of well-respected experts, collaborations are afoot between the public and private sectors, and there are cross-fertilisation opportunities rising from the UCT Private Academic Hospital sitting on the doorstep of training facility Groote Schuur Hospital. These factors bode well for the future of neurosurgery at the university and in the region, noted Fieggen.

"This will enable us to retain and grow the expertise we currently enjoy, develop the state-of-the-art infrastructure we need in terms of clinical space, imaging, operating theatres and even shared academic space, ensure we can train colleagues adequately, and serve as a springboard for translational research as well as nurturing a greater interest in basic neuroscience research."