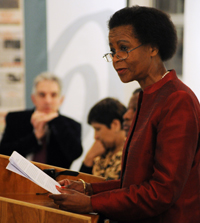 South Africa's already so-so score on the inaugural Open Society Monitoring Index (OSMI) could take a further beating from two much-decried legislative measures in the making - a proposed parliamentary media tribunal, and the Protection of Information Bill 6 of 2010.

This was the view of current and former UCT vice-chancellors Dr Max Price and Dr Mamphela Ramphele, when they spoke at the launch of the OSMI at UCT on 12 August. Developed and conducted by UCT's Democracy in Africa Research Unit on behalf of the Open Society Foundation for South Africa (OSF-SA), OSMI is designed to measure constitutional democracy in South Africa.

It does so by looking at three main 'dimensions': the free flow of information; inclusive, accountable and responsive government institutions; and adherence to the rule of law.

South Africa earned an overall score of 5.5 (out of a possible ten) on the first run of the index, and the 'rule of law' dimension earned the country its lowest rating of 4.3. Under the index's nine sub-dimensions, 'free and fair elections' (7.4) was the only one in which South Africa scored higher than a six.

According to Zohra Dawood, executive director of the OSF-SA, the relatively high score for 'free and independent media', which came in at 5.6, was surprising, given the reports of attempted political interference in news reporting and the mismanagement of the SABC. "Despite these challenges, respondents felt media independence is safeguarded by relatively effective oversight institutions, such as the courts, and the public enjoys trouble-free access to reliable news sources."

But as she, Price and Ramphele pointed out, the proposed media tribunal and large parts of the Protection of Information Bill 6 of 2010 would probably undermine that freedom and access.

Speaking on the media tribunal, Price argued that there are ample and strong measures already in place - a Press Ombudsman, the courts - to ensure responsible reporting.

"A parliamentary media tribunal will sound the death knell to the free flow of information and hence the ability of the public to know enough to contribute to, criticise or challenge policy-making, hold government accountable for its decisions and actions of commission or omission, and ultimately to know enough to vote for change," he said.

The often open-ended clauses of the Protection of Public Information Bill leave the door ajar for misuse and abuse, said Ramphele, especially as state-held commercial information such as tender proceedings could be classified. "These clauses would seem to provide a cloak for corrupt practices that would obscure visibility to the public."

Which is where the Open Society and its index come in. Through them, threats to the free flow of information, transparency and free speech can be debated and government institutions can be held to account.

(Listen to the podcast).