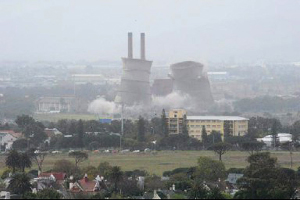 The Athlone cooling towers that have been so much a part of the vista from upper campus, stretching across the Cape Flats to the Hottentots Holland Mountains, are no more.

At four minutes to 12h00 on 22 August, 7 000 charges were set off and the towers collapsed under their own weight. The demolition was viewed by thousands from vantage points all over the city.

Traffic around campus fed the gridlock on the M3. Throngs of visitors and students packed the upper and middle campuses for a view of the drama. On the lawns below the Sports Centre people gathered with binoculars, picnics and deck chairs, despite almost unrelenting rain and low cloud.

Alas, the implosion lasted all of five seconds and, because of the premature start, many viewers missed it. All that remains is rubble, said to contain 21 600 tons of concrete.

"My point of view was in Kewtown where I entered the bush at the T-junction of Hickory and Koodoo Streets. Change can sometimes happen quicker than you think if the weather is right and, if you are not prepared, you may be left startled.

"I went on a rendezvous at about 09h00, taking photographs, from all angles: Athlone, Kewtown, Crawford, Gleemoor, Bridgetown, and Nyanga. This also covered historical landmarks such as the Alexander Sinton High School, the Trojan Horse Memorial, and Goldblatt's which, during World War II, was where food rations were dispensed.

"In the Kewtown bush I marvelled at the green pastures, now damp and water-logged. It also gave me a sense it was the best place to be, when I returned later.

"On the outskirts I was confronted by law enforcement, but managed to get a photo.

"I returned to Kewtown at about 11h15, with my raincoat. At about 11h30 I set the timer on my watch, so that I was absolutely in sync for the count down.

"Once again I trekked into the bush, taking some lead-up photos. More people gathered and the police helicopter, doing some final checks, came to assess things.

"I kept a steady eye on my watch and knew that when the helicopter left we were in serious count-down mode. Some law enforcement officers arrived and made their presence felt. My negotiating skills kicked in. As I heard the siren going, it started to rain. I had my finger on the camera trigger when the implosion started prematurely. It's one of those things that you can't restart! I left as the dust cloud developed and after it had settled I took follow-up photos. Surprisingly, the staircase remained untouched by the implosion. It gives one something to think about."

(See footage filmed from the top of the Kramer Law Building on middle campus by Katherine Traut of UCT's Communication and Marketing Department here.)