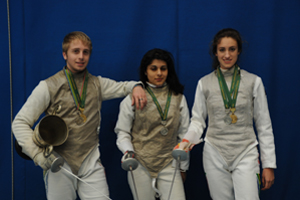 The UCT Fencing Club retained its status as one of the strongest in the country when it scooped four medals at the South Africa National Championships, held at the University of the Free State.

The strength of the club was evident in the women's foil event, which ended in an all-UCT affair with Giselle Vicatos beating Yasmin Hankel for gold. Vicatos also took the silver medal in the woman's épée event, losing out to Shih-Ya Huang, a UCT alumna and former UCT sportsperson of the year.

Jacques Viljoen, the current UCT sportsperson of the year, won the men's foil title for the second year in a row, bringing UCT's medal tally to two golds and two silvers. Notably absent from the championships was Michael Malahe, ranked first in men's épée, who had to withdraw due to injury.