Self worth through status symbols 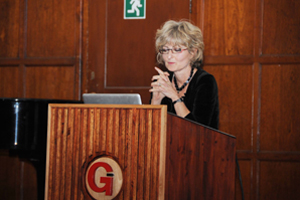 Consumerism critiqued: "Much like today, people linked their sense of dignity and respect with their consumerism" - Prof Deborah Posel

Self-styled maverick, academic dissident, and described by some as the best critic of America that America has ever produced, economist and sociologist Thorstein Veblen developed a theory of consumerism that still resonates today.

This was the message of a public lecture by Professor Deborah Posel, founding director of UCT's new Institute for Humanities in Africa, delivered as part of the Gordon Institute for Performing and Creative Arts' Great Texts/Big Questions lecture series on 12 August.

Titled Conspicuous Consumption, Conspicuous Waste: Thorsten Veblen's theory of the leisure class, Posel's lecture outlined the life and work of Verblen, focussing on his key publication, The Theory of the Leisure Class. Published in 1899 while Veblen was a professor at the University of Chicago in the US, the book is considered the first detailed critique of consumerism, but in terms that made Veblen instantly unpopular among his fellow economists.

"The book is a scathing attack on his world," said Posel. "Veblen lived in a time of disease, overcrowding and premature death. He was both fascinated and appalled by the cultural life of stuff. He asked why so many people, in so many societies, across space and time, have been so invested - psychologically, socially and financially - in the conspicuous display of objects with little functional utility - purchases that orthodox economists would consider economically irrational".

"Veblen was deeply troubled by poverty alongside ostentatious displays of wealth by the rich, but vented his spleen in detailed commentaries on the use of material objects - such as dress, art works, household displays - to produce what he called social 'honour' or 'esteem' - a sense of personal wealth reflected through the eyes of others".

Posel pointed to Veblen's remarkable prescience as a nineteenth century thinker, in anticipating writings on the modern consuming self: those whose identity is established in how other people judge his or her status as a consumer.

Other original features of his analysis was his recognition of the extent to which relationships between men and women were governed by the cultural politics of stuff, with women consumers as ways for men to establish their 'honour' in hierarchies of wealth and power.

Posel's lecture paid particular attention to Veblen's concept of 'emulation', which referred to his idea of how the less well off aspired to emulate the ways of those higher up the social hierarchy of 'honour'.

Posel cited a sociology study conducted in Lancashire in the UK in the late 1800s. "A study of pawn shops showed that the first thing people pawned were the useful, functional things. The last of their possessions to go was all the stuff they had in their front room - the room was very seldom used, but could be seen from the street."