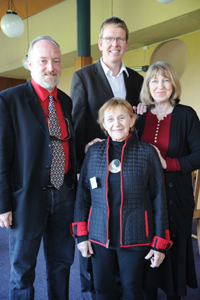 A treasure trove of books, essays and assorted papers from the private library of renowned economist William Hutt (1899 to 1988) was donated to UCT's Department of Economics by his widow, Louis Hutt, now 94, at a function on 3 August.

A former dean and economics professor at UCT, Hutt was an influential classic liberal thinker, who famously disputed that labour was at a disadvantage in bargaining with employers - a commonly held position at the time. In his 1936 book Economists and the Public, he coined the now famous concept "consumer sovereignty".

Dean of Commerce, Professor Don Ross, describes Hutt as one of the most distinguished economists in the school's history.

But the nature of the donation itself remains a mystery. Louis Hutt, who met her future husband on the summit of Table Mountain when she was a "bohemian" fine arts student and he a sober economics lecturer, had the entire contents of the library packed into scores of pink boxes for storage.

So it falls on Lesley Hart, manager of UCT Libraries Manuscripts and Archives, to unpack the boxes to see what treasures it might contain.