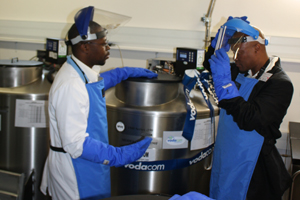 Chilling out: Attending to the new storage tank are (from left) Blessing Kadira of the SATVI Lab and Mthobeli Tengimfene of the Vodacom Foundation.

A new liquid nitrogen tank with a capacity to store 36 400 vials of blood products in temperatures as low as -195 degrees Celsius was donated to UCT's South African Tuberculosis Vaccine Initiative (SATVI) by the Vodacom Foundation.

One of the leading TB vaccine research organisations in the world and based in UCT's Institute of Infectious Disease and Molecular Medicine, SATVI is set to expand its capacity to store blood samples from people who take part in its research.

Vodacom officially handed over their donation to SATVI on 5 August, along with a data back-up system to ensure that valuable data is not lost.

Valued at R528 000, this is Vodacom's second large-scale contribution to SATVI. In 2005, the cellphone company contributed R2 million to fund SATVI's laboratory.

Mthobi Tyamzashe, chair of the Vodacom Foundation, said: "As the largest dedicated TB vaccine research group in Africa, SATVI is playing an invaluable role in the fight to eradicate this disease. We trust the donation will enable the organisation to strengthen its important work."

SATVI is part of a global initiative to develop and test more effective vaccines against TB. It is currently conducting the most advanced study of a new TB vaccine in infants in the world, and is also the only site to be testing multiple new TB vaccines.