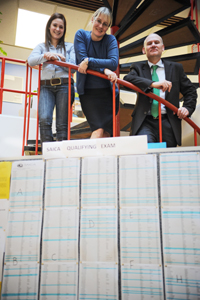 Success: Celebrating UCT's board exam results are (from left) Lori Berelowitz, Carol Cairney, course co-ordinator and Prof Mark Graham, head of UCT's Department of Accounting, who is elated with his staff for helping the greatest number of students to pass the South African Institute of Chartered Accountants' (SAICA) board exam.

Professor Mark Graham, head of UCT's Department of Accounting, is elated with his staff for helping the greatest number of students to pass the South African Institute of Chartered Accountants' (SAICA) board exam.

Results for the 2010 SAICA Part One (aka the Board Exam), a mammoth 12-hour slog written from 27 to 28 January, revealed an 89% pass rate for UCT's first-time examinants - high above the national average of 73%.

Graham was especially pleased that UCT had the highest absolute number of first-time passes in the exam (247 in total) of all universities in South Africa.

"A further highlight was the success of our African, coloured and Indian students," says Graham.

Altogether, 115 African, coloured and Indian students from UCT passed, a number that comprised 47% of the university's successful students.

During 2009, UCT ran a programme for about 40 students who needed to repeat the Qualifying Exam. The pass rate for this group was 38%, versus a national average of 21% for repeat students.

"Well done to all the staff in the department who played a role in achieving another successful Board Exam result," said Graham. "This is a success that can be shared by those who teach classes in the earlier years, our colleagues in UCT's Education Development Unit, our support staff, and those who teach the Postgraduate Diploma in Accounting."