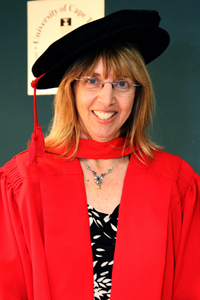 Not backing down: The burden of respiratory diseases among children in Africa creates opportunities for innovation, said Prof Heather Zar.

Lung illnesses are the main cause of deaths and of morbidity amongst children globally. Among these, childhood pneumonia, tuberculosis and asthma predominate. And African children bear the major brunt of this burden, which is largely preventable or treatable.

If the picture Professor Heather Zar, head of the Department of Paediatrics and Child Health and director of the School of Child and Adolescent Health, painted of the current state of child lung health in Africa at times appeared gloomy, she was at pains to point out that medical scientists and clinicians have made impressive strides to turn the tide.

Yes, the country's under-five mortality rate - a widely used gauge for health status and socio-economic development - is on the rise. Yes, pneumonia is the leading cause of child deaths on the continent. (Such are the numbers that Zar drew a comparison to a packed jumbo jet crashing every hour, 24 hours, every day.) Yes, sub-Saharan Africa and, notably, the Western Cape also bear the brunt of the world's tuberculosis burden, and of that "cursed duet" of TB and HIV. And, yes, there is a growing prevalence of asthma among children aged 13 to 14 years in Cape Town and in Africa, making asthma the most common chronic illness in children.

But in the face of these challenges, as Zar stressed in her lecture, Child Lung Health in Africa: Challenges and opportunities, delivered on 28 July, clinicians and scientists have developed a score of tools and treatments to prevent or better treat these illnesses.

Specialists and sub-specialists working in an academic centre can have a real impact on health care at all levels, far beyond that of a tertiary centre, said Zar. And some of these innovations have been rolled out across the globe.

Such studies have shown that bacteria especially Streptococcus pneumoniae and tuberculosis are very important causes of pneumonia in children. They've also shown that Pneumocystis pneumonia (PCP), a form of pneumonia occurring in people with weakened immune systems, is very common in HIV-infected infants. This is important as PCP can be effectively prevented by using a cheap and widely available antibiotic, cotrimoxazole, reported Zar.

Cotrimoxazole now features as a recommended standard prophylactic against PCP in HIV-infected people across the world. Recently Zar and colleagues have also shown that in HIV-infected children, cotrimoxazole, when taken daily, is highly effective for preventing other forms of pneumonia such as those due to bacteria.

Zar and colleagues have also shown that sputum induction (a technique that involves nebulising children with hypertonic (high-salt containing) saline and then asking them to cough or suctioning their mucus) - is better for diagnosing tuberculosis than the commonly used gastric lavage, which involves passing a tube into the stomach and suctioning the stomach contents. (It is also, for obvious reasons, more comfortable and there is no need to hospitalise a child).

This research, published in the prestigious journal, Lancet, has changed global practice in diagnosing TB in children. Zar and colleagues have ongoing studies to evaluate better and quicker ways to diagnose TB in children both in hospital and in the community.

More recently Zar and colleagues have shown that use of isoniazid, INH, a cheap and available drug for TB is very effective for preventing TB in HIV-infected children. Published in the British Medical Journal, this research showed that INH reduced mortality by more than 60% and TB by more than 70%. These are exciting findings that may offer a potentially important public health intervention in areas of high HIV and TB prevalence such as South Africa.

For asthma treatment, they have developed and produced a low-cost spacer - using a plastic cooldrink bottle - that is fitted onto an asthma pump to enable inhaled therapy. This is as effective as commercially available spacers. This bottle spacer is also now used globally. In so doing, says Zar, they have empowered caregivers and children.

In addition, Zar has contributed to a number of national and international guidelines on child lung diseases. Such guidelines have potential to influence clinical practices globally.

"We have a large number of vulnerable children in Africa," she noted. "But working in an academic centre we have a real challenge and opportunity to advance care for children by developing new strategies and treatments."

As Emeritus Professor Kit Vaughan pointed out in his closing words, Zar has been widely hailed as an outstanding and original researcher.

"Her research has been driven by the huge burden of paediatric illnesses - with associated mortality and morbidity - and she has highlighted the need for improved diagnostic, therapeutic and preventative strategies," said Vaughan. "As Heather has illustrated this evening, the need for these strategies is especially acute in resource-constrained environments such as those we face here in South Africa."