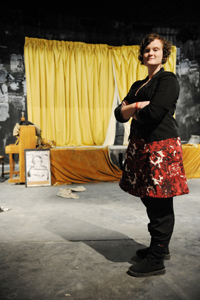 The result is Notcutt's between you & me, a workshopped production that explores the long relationship between a man and a woman, and whether the compromises that they made to be together were worthwhile.

Notcutt describes between you & me as a piece about two people; trapped between reality and fantasy.

Currently in pre-production under the mentorship of the director of the Baxter Theatre, Lara Foot, between you & me will run at the Theatre Arts Admin Collective from the 17 to 21 August.

"The theatre that I want to make is theatre for now,' explains Notcutt. "I want to make theatre about the people I experience on a daily basis, about a world that I know and relate to, and stories that resonate on even the smallest level."

After between you & me, Notcutt will direct an adaptation of selected Herman Charles Bosman short stories, which will be performed at the Voorkamerfest in Darling. Notcutt will then collaborate with the first recipient of the Emerging Directors Bursary, UCT graduate Amy Jephta, in directing one of Jephta's works, which will be part of a double bill premiering at the Intimate Theatre in November.

"Growing up in Cape Town, it has always been a dream to one day work at the Baxter, making the great plays come to life at one of the country's greatest theatres," says Notcutt. "I think the fact that a bursary such as this exists is ongelooflik. It's an incredible helping hand on the road to turning childhood dreams into reality, and for that, I am extremely grateful."