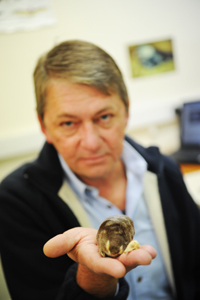 A UCT zoologist has had a fossil named after him, in recognition of his "major contributions" to understanding the biology of Africa's endemic and enigmatic golden moles.

Dr Gary Bronner, of the Department of Zoology, says he feels "rather bemused" at the honour.

"Naming new fossil species after someone is not rare, and it is always great to have your research efforts acknowledged. But, having a five-million-year-old fossil named after you when you are in your forties, tends to make one feel rather like a fossil yourself," he says.

The fossil, named Chrysochloris bronneri, was recently discovered at the West Coast Fossil Park in Langebaanweg by Professor Rob Asher of Cambridge University. Asher is an expert on the evolution of insectivoran (insect-eating) mammals, in particular the ancient African lineage including the Malagasy tenrecs (small burrowing insectivores that hail mostly from Madagascar) and their closest living relatives, the golden moles.

The fossil mole - dating back to the early Pliocene at least 5.2 million years ago - is closely related to the living Cape golden mole Chrysochloris asiatica, which is common in the south-western Cape, including the Cape Peninsula, and Northern Cape coastal plain.

Bronner explains that the characteristics that set the new fossil species apart from other golden moles are subtle. So, for example, the lower jaw bone of C bronneri is more strongly developed than that of extant C asiatica (its closest living relative) or another fossil species (C arenosa), with which it lived at Langebaanweg.

Bronner is a member of an international research team that includes Asher, as well as researchers Professors Nigel Bennett and Paulette Bloomer, and Dr Sarita Maree, all from the University of Pretoria. They are deriving a robust phylogeny (evolutionary tree) for the poorly-studied African family Chrysochloridae, comprising 21 golden mole species.

The team recently published the first phylogenetic estimate for golden moles based on both molecular and morphological data, and a fully-resolved phylogeny based on more species and data suites will be published later this year, reports Bronner. (The other author of the paper describing the new species is Dr Margaret Avery, formerly a palaeontologist at Iziko Museums in Cape Town and now retired.)