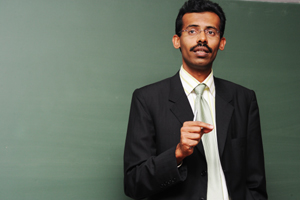 The writing's on the board: South Africa's growing energy needs has triggered a greater need for alternative-energy resources, said Eskom's Kannan Lakmeeharan.

The Department of Electrical Engineering hosted a seminar titled Renewable Energy in South Africa: Initiatives, Opportunities, Challenges and Innovation on 24 June, where participants looked at the need for a diversity of electricity-generation technologies in South Africa.

The recent energy crisis and ESKOM's difficulties to secure funding from the World Bank for the completion of Medupi (a giant coal-fired power plant with an estimated price tag of R120 billion), as well as the government's decision to withdraw funding from the pebble-bed modular reactor nuclear programme, reinforces the need for alternatives to fossil-fuel based electricity generation.

"South Africa is facing serious issues over the next year and next 20 years," said Kannan Lakmeeharan, managing director of the System Operations and Planning Division at Eskom. The country needs about 50 gigawatts of new energy; 10 gigawatts to replace plants decommissioned by Eskom, added Lakmeeharan.

Several alternative- energy research projects are underway that can be implemented readily without much effort.

"The challenge here is in turning lab-scale research into the implementation of technology," said Kadri Nassiep, CEO of the South African National Energy Research Institute.

Nassiep added that there is a need for a vast number of special skills, and investment in human capital with a focus on the role of universities in training them. In his opening remarks, Professor Thandabantu Nhlapo identified the role of universities, and more specifically UCT, in addressing South Africa's energy crisis. "A university shouldn't only teach, but should establish within South Africa an opportunity for institutions of higher learning to apply their minds and research know-how to solve these challenges and problems."

UCT, one of highest PhD-producing universities in South Africa, has a vast cohort of researchers working across disciplines on energy efficient and renewable energy technologies.

"Renewable energy is a hot topic on undergraduate and postgraduate levels," said Professor Barry Downing, head of the Department of Electrical Engineering. "It affects our intake of students and how learners see the discipline."

Some of the novel technologies being developed by UCT researchers include paper-thin solar panels and a South African wind atlas.

The workshop was co-hosted by UCT, the Institution of Engineering and Technology, and the Institute of Electrical and Electronics Engineers.