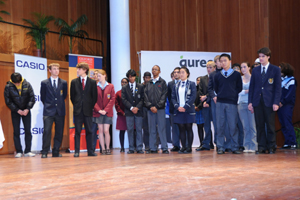 Mathematicians: Winners of this year's UCT Mathematics Competition were honoured with calculators, watches, certificates and trophies.

Mathematics is essential to any modern economy, yet Maths education is in such a bad shape in South Africa that - to mend the situation - it should be declared an official language, according to UCT's Emeritus Professor Francis Wilson.

Speaking at the UCT Mathematics Competition prize-giving ceremony on 25 May, Wilson said that if maths is made the country's twelfth official language, then everyone will take it more seriously. Without at least some basic mathematics, a person is excluded from a whole range of vital areas in life, Wilson, of the School of Economics, argues.

Meanwhile, scores of learners were rewarded with anything from calculators, watches, certificates and trophies for being high achievers in the competition. Among them were first place gold award winners Greg Jackson of Bishops High in Grade 12, Sean Wentzel of Westerford High School in Grade 11, and second place gold award winner in Grade 11, Ashraf Moolla of Rondebosch Boys High School. All three learners have been selected to represent South Africa at the International Mathematical Olympiad to be held in Astana, Kazakhstan in July.