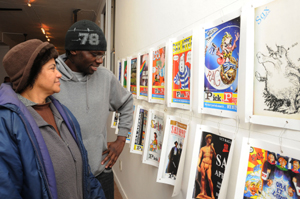 Moments in time: UCT staffers Cecelia Botha and Lovemore Nalube were entertained by the exhibition of SAX Appeal covers through the decades.

Seventy-eight years of satire, censorship and controversy are on display in a new exhibition of SAX Appeal covers at UCT's Centre for African Studies.

The magazine covers showcase the many changes made to UCT RAG's largest contributor since the first edition, published in 1933, "when men were men and women were so loose they rattled", according to a 1940s SAX Appeal editor.

Selling at one shilling and weighing in at 32 pages, the 1933 edition featured cartoons, limericks, an advert for electricity - when many Capetonians were yet to learn the benefits of an electrified city - and an advert for Springbok cigarettes; which, true to the times, featured a confident doctor smoking the product before operating on a scantily-clad woman.

Established as a beacon of free speech, the magazine's penchant for ruffling feathers has resulted in several instances of controversy, and two outright bannings, the first leading to the magazine's dissolution for several years.

SAX Appeal's first banning was in 1942, for the publication of a fictional, humorous story titled Visit to a Nudist Colony. It was banned again in 1971 after publishing a joke about St Peter, Jesus and God playing golf. This so incensed a student Christian society that they publically burned copies of the magazine. SAX Appeal was replaced by the short-lived Boomalak, which proved too tame for student tastes.

Speaking at the exhibition's launch on 13 May, deputy vice-chancellor Professor Crain Soudien praised the curator, Siona O'Connell, for spearheading the project from concept to exhibition.

"The archive of SAX Appeal covers serves as an accurate reflection of the moods, fancies and complexities of UCT life," he said.