Science makes the day in Khayelitsha 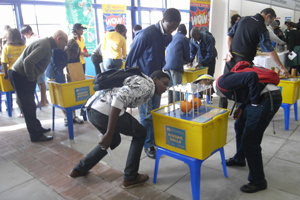 Baby sharks, crayfish, mathematics puzzles and chemical experiments brought the natural sciences alive for hundreds of grade 11 and 12 pupils from Khayelitsha, who converged on host school Harry Gwala for the Faculty of Science's Science Day.

The faculty believes it is imperative to address the skills shortage in science and annually hosts Science Day in a different community.

Holding the annual event on a Saturday was a first for the faculty - and there was plenty to do. In the astronomy workshop they made telescopes. At The Sound of Music workshop they used test tubes with different levels of water as musical instruments, and played the tune of Nkosi Sikelel' iAfrika.

Among the various workshops on offer were the Chemical Kinetics workshop where the pupils combined chemicals to create new substances, as well as the Princess Earth and her magic coat discussion, which was all about global warming, Oceanic robots and climate change.

Deputy vice-chancellor Professor Crain Soudien addressed the group, encouraging them to set goals, think about the future and find opportunities in their areas. He said it was encouraging to see the growth in the number of students coming from Khayelitsha.

Pule Hlahane, a UCT PhD student told the pupils how science had been his passport to opportunities: earning a good living, and making a difference to the country through ground-breaking research.