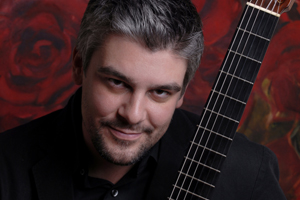 Acclaimed guitarist James Grace has recently won the KANNA award for Best Male Artist for his show Around the World in Sixty Minutes at this year's Klein Karoo Nasionale Kunstefees (KKNK) in Oudsthoorn.

Grace, head of classical guitar studies at the South African College of Music, received the award at a ceremony in Cape Town on the 9 May.

The KANNAs are awarded annually for the best productions at the festival, and the category Best Male Artist is among the most prestigious. Other nominees in the category included singer Nataniël and playwright Chris van Niekerk.

"I'm very proud to have won this award," said Grace. "I was a bit surprised as the KKNK is a predominately Afrikaans festival, and me being an Englishman by birth and not having one word of Afrikaans in my show makes the award even more special! It just shows you the power of music, which can say more than words in any language."

Earlier this year Grace was nominated for a South African Music Award (SAMA) for his fourth solo album Sevilla - Music of Spain II.

Grace is in the final stages of setting up the Stringwise Young Artist's Trust, which aims to assist young South African musicians with financial assistance for overseas studies and instrument purchase.