Ikeys give Maties too much of a headstart 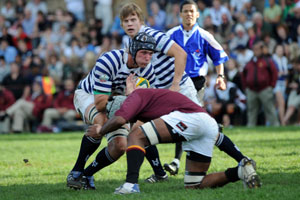 It's a hallmark of the rugby intervarsity clashes that the Stellenbosch University's Maties would take a marginal early lead, while UCT would stage a hearty comeback in the latter parts of the game.

The latest intervarsity, played at UCT on Saturday, 8 May, went pretty much to script then. Other than that UCT allowed Maties too much leeway in the first half, and by half time the visitors had built up a commanding 24-0 lead, making hay with the wind at their backs.

And while the Ikeys did put up that trademark second-half rebuttal, it was a bridge too far. An early try by Don Armand for Ikeys reduced the deficit to 7-24, but a final Maties try - with substitute Dylan Rodgers back on the bench thanks to a yellow card - proved to be the final nail in the UCT coffin.

Undaunted, the Ikeys continued their push for points but the best they could manage was one more goal - a try by Nick Fenton-Wells, converted by Matthew Rosslee '“ that took the scoreline to a closing 14-29.

Earlier, the universities' under-20s had played to a 17-all draw as UCT failed to make their territorial advantage count. The teams shared the spoils and the Henley Atkins Trophy.