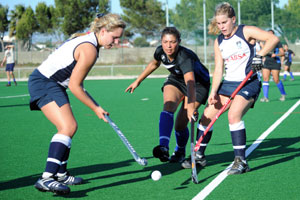 At a stretch: Players like Kendal Devine (left) and Jessica Kew (far right) - here surrounding Central's Elize Goliath - did their best, but UCT seemed short of ideas as they went down 0-1.

It's been a yo-yo season for UCT's women's hockey A team.

Two wins and two defeats - the latest a 0-1 loss to Central on 1 May - in their first four games in the Western Province Hockey Union's Ladies Grand Challenge (LGC) has lifted the side to fourth spot, but with a couple of teams still with games in hand, they could drop down a few spots still.

(The UCT B team, in the meantime, is anchored at the bottom of the log with three defeats in their three games. They've also conceded 20 goals and have yet to net one of their own.)

And with the youthful UCT A in rebuilding mode, it's unlikely that they will in 2010 return to the heights, not too long ago, when they were consistently the second-best side in the LGC, playing second fiddle only to a Stellenbosch outfit that brimmed over with national players. The team is, for now, made up mostly of first years - like SA under-19 player Amy Freakes - and second years, with only one or two senior players around.

"It's a young side," says the squad's coach, Matthew McConkey. "There's lots of talent there, but it all just needs to come together and we need to start performing."

This year may be a tricky time to do that. Those Stellenbosch players have now been redistributed among some of the other LGC sides, which may have weakened the Maties but has invigorated the likes of log leaders Western Province Cricket Club A, Somerset West and Pinelands. But McConkey still has a spot in the top four in mind for his young players.