Engineering students must build the country 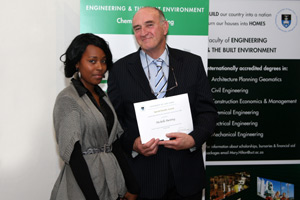 Engineering students have an obligation and opportunity to make South Africa work by improving and maintaining the country's ailing infrastructure, according to Robin Carlisle, Western Cape MEC for Transport and Public Works.

At the annual Engineering & the Built Environment (EBE) Awards on 29 April, Carlisle reported that a study by Sakh'Isizwe - a joint project between the Western Cape Provincial Government, the four higher education institutions in the province and the private sector to breed new engineers - has revealed that most municipalities in the Western Cape lack technologists and technicians. This comes as roads are deteriorating, the railway system has largely collapsed, and 400 000 people need to be housed, among other issues.

He added that it concerns the government that the "march" from being a graduate to a professional takes too long.

Professor Francis Petersen, dean of EBE, said the faculty always emphasises to students that they should possess five characteristics when they leave the university. These are critical perspective; quality assurance; sensitivity and understanding of critical aspects of safety, health and environment; professionalism; and social responsiveness.