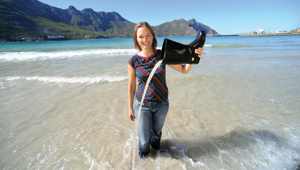 Dr Gina Ziervogel, is one of only two researchers in the country to earn a National Research Foundation P-rating in the recent ratings cycle - a distinction that singles out young (under 35), up-and-coming researchers as potential national and world leaders in their fields.

When she heard that she'd been awarded a P-rating by the National Research Foundation - and was one of only two researchers in the country to earn the distinction in the recent ratings cycle - Dr Gina Ziervogel felt just a tinge of pressure.

The P-rating singles out young (under 35), up-and-coming researchers as potential national and world leaders in their fields. How, Ziervogel wondered, would she live up to such lofty expectations?

By just pressing on with what she's been doing already, a colleague advised her.

What she has been doing is building up an already impressive résumé of work in the Climate Systems Analysis Group (CSAG), operating out of UCT's Department of Environmental and Geographical Science. Specifically, on climate change adaptation and how institutions and communities respond to climate change events. (See sidebar for her latest project.)

Ziervogel's interest is at the intersection of science and broader society, and in how to make science applicable in society. Her doctoral thesis, for example, looked at whether smallholder farmers in Lesotho found any value in some very sophisticated and - on paper - useful seasonal climate forecasts.

"It's clear that we need to respond better to current climate variability and climate risks," she says, "and we have information that can help us to do so, but we're not using it very well at the moment."

It's a problem she's tackling on many fronts. That includes working with and in communities, with municipalities and international partners, speaking at conferences and meetings, getting involved in outreach projects, and teaching.

"Arguably, one of the single biggest challenges around climate and society is enabling an informed and wise response to impacts from climate variability and climate change," says Professor Bruce Hewitson, CSAG head. "Gina's work directly contributes to this challenge and is of substantial value to society."

As for that whole pressure thing, Hewitson is among those who hold that, given Ziervogel's pioneering work in Africa and her impressive international standing, the P-rating is a deserved recognition of her already impressive track record.

Now she just has to stick at it.

Dr Gina Ziervogel is the principal investigator in a just-launched three-year initiative of UCT's African Centre for Cities (ACC) that will explore options for a collaborative response to urban flooding and sea-level rise in the Western Cape, with Cape Town's Philippi (a high flood-risk area that's been hit hard by storms in recent winters) as a case study.

Ziervogel and ACC staff will work closely with a range of stakeholders - the City of Cape Town, and community groups in Philippi among them - to see how risk management and response may be strengthened by getting all these stakeholders to work off the same script. And as equals.

"At the moment, the response to floods and climate-variability risk is managed in a very technical, top-down way by the City of Cape Town," says Ziervogel. "And we believe there's room for a multi-level, interactive response."

Other partners at UCT are the African Security and Justice Programme in UCT's Centre of Criminology, the geomatics department and the Cape Urban Observatory that fall under the ACC, while external partners include the City of Cape Town, Shack-Dwellers International and the Stockholm Environment Institute.