Relaxers may cause bad hair days 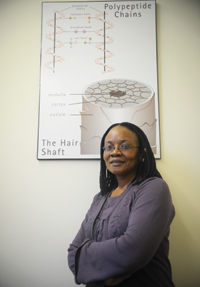 Relax: Assoc Prof Nonhlanhla Khumalo has shown that the use of relaxers is weakening hair, leading to hair loss.

Hair relaxers may elevate young school girls to the in-crowd but, as UCT dermatologist Associate Professor Nonhlanhla Khumalo has shown in a recent study, they may lead to a rash of embarrassing hair and scalp conditions, including hair loss.

Frustrated by the dearth of academic material on hair conditions and disease, especially those affecting black Africans, Khumalo, based in the Division of Dermatology at Groote Schuur and Red Cross Children's Hospitals, got the ball rolling herself with two lay-of-the-land population studies conducted in the nearby Langa community and published in the British Journal of Dermatology in 2007. The articles showed that some 70% of school girls and 60% of adults were using hair relaxers to straighten their hair.

For black women, the most worrying causes of hair loss are traction alopecia (TA), most common on the hairline and the result of pulling on hair into a tight ponytail, braids and weaves; and the tongue-twistingly named Central Centrifugal Circatricial Alopecia (CCCA), which leads to messy bald spots that spread from the crown of the head. The highest risk of TA occurs when traction hairstyles are performed on relaxed hair.

The link between relaxers and hair loss was becoming clearer for Khumalo. Relaxers are known to straighten hair by breaking down the sulphur bonds that hold together the hair protein chains.

But the question that still begged to be answered - at least for those Khumalo saw filing into her hair clinic at Groote Schuur - was how relaxers actually cause the hair loss. She now has some answers.

Her latest study, published in the March issue of the Journal of the American Academy of Dermatologists analysed the amino acid content (the building blocks of protein) of natural and relaxed hair. The study showed that relaxers change the levels of four of the 16 amino acids that make up a strand of hair.

The changes in three amino acids have been associated with inflammation, and may be the way by which relaxers contribute to permanent hair loss and CCCA. This link however requires confirmation and is currently being studied further. The fourth change in relaxed hair was a dramatic reduction in cystine the amino acid directly responsible for hair strength.

Even more worrying, Khumalo's research revealed, was that the levels of cystine in oft-relaxed hair was comparable to that in people who suffer from a genetic condition called trichothiodystrophy, which is associated with fragile hair.

"The end result is that the hair is fragile and brittle compared to the original, un-relaxed hair," says Khumalo.

Adding extensions, weaves or braids to the hair compounds the problem by putting further pressure on the already weak strands. No surprise, then, that the hair breaks off or falls out.

Khumalo also found that cystine content was lowest in hair furthest from the scalp (distal hair) than in hair closer to the scalp (proximal hair), suggesting that the damage increases with more frequent relaxer use. A possible solution that needs industry investigation is to protect the distal hair with a barrier cream or by wrapping it up in foil during the relaxing procedure.

The best solution, says Khumalo, would be to go natural - it is healthier, especially for children. (It is disturbing that many schools forbid natural hairstyles such as dreadlocks - like hers, but, admits Khumalo, natural hair (like all hairstyles) requires good grooming.

Khumalo has other tips: if you do use a relaxer, stay clear of (or limit) braiding and extensions. Any hairdresser that painfully pulls hair (natural or relaxed) should be avoided, she adds.