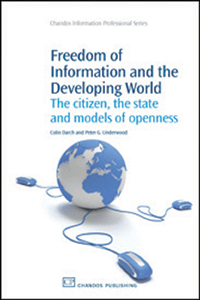 Professor Peter Underwood, director of UCT's Centre for Information Literacy, and Dr Colin Darch of UCT's African Studies Library are co-authors of the recently published Freedom of Information and the Developing World: The citizen, the state and models of openness. Monday Paper spoke to Underwood about the project.

How would you sum up the book?

We discuss Freedom of Information (FoI) and the argument that it is a human right. We then consider the development of FoI in several developing countries, to decide if there is a general model or reason for adopting FoI. We conclude there isn't, and that reasons for adoption tend to be specific to a country.

What prompted you to write it?

We were commissioned to write a paper about the introduction of the Promotion of Access to Information Act in South Africa in 2000. This prompted our interest, and we realised that the standard model used to explain adoption was deficient in several important respects. We sought to refine the model, but concluded that there is no 'meta-narrative' that unites the explanation for FoI developments in Africa.

How does FoI affect economic development?

FoI is a consequence of economic development. External investors require adequate demonstration of financial and other forms of probity.

What impact does it have on democracy?

FoI legislation Acts provide the opportunity, but an appropriately trained administration and a broad societal understanding are required.

So how has FoI affected South Africa?

We have what is widely regarded as the 'gold standard', but effective use of the legislation Acts is the arbiter of success. So far, the effect has been muted because of the lack of societal awareness and a lack of adequately trained staff. There are several examples where applications for access to information have been blocked by administrative difficulties.

And how does the lack of FoI affect other African countries like Zimbabwe, now celebrating 30 years on independence?

Actually, Zimbabwe has FoI. The Access to Information and Privacy Act was signed by President Mugabe in 2002. Is it being used for societal development in Zimbabwe? We rather believe not.

What limitations are placed on FoI in South Africa?

There are many restrictions, as in most countries. Examples of purposeful destruction of records, such as the "Muldergate scandal", abound in our history. But any bureaucracy can limit access if it so decides. An alert citizenry, proper use of investigative journalism, scrutiny by independent bodies, and persistence are needed. We must not be naive: information can be a powerful tool, and no government or organisation gives it up willingly. Legislation provides the potential to acquire information - but it must then be used responsibly.

Are countries in transition really helped by FoI?

We would like to believe that FoI is an enabling legislation for which all societies should clamour, but showing that it helps (or hinders) countries in transition is a very difficult matter. Perhaps we shall tackle that as our next project!