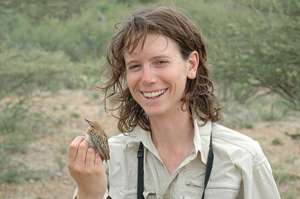 Brood parasitic birds, such as cuckoos, are cheats that lay their eggs in other species' nests, exploiting them to raise their young. Over time, host species have evolved defences against this, such as rejecting foreign eggs from their nests. In turn, the parasitic birds have evolved counter-adaptations, such as egg mimicry, says Dr Claire Spottiswoode.

An orthitholigist, Spottiswoode presented a talk on 7 April on the evolution of the colour of birds' eggs part of the 50th anniversary seminar series of UCT's Percy FitzPatrick Institute of African Ornithology.

Spottiswoode, a research associate of the FitzPatrick Institute and a Royal Society Dorothy Hodgkin Research Fellow at the University of Cambridge in the UK, presented her findings in a talk titled Arms Races Through Colour Space: co-evolution and the Cuckoo Finch.

"The two parties can thus become locked in a co-evolutionary struggle," said Spottiswoode, "each to stay one step ahead of the other, as parasites evolve ever better manipulation of their hosts, and hosts respond with ever more refined defences to evade parasitism."

This co-evolution is an "arms race", which "has led to remarkably rapid changes in egg appearance within the time scale of a human lifetime".