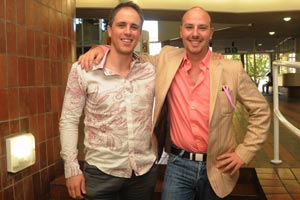 Students should be innovative, must take risks, and should be able to deal with criticism for failed projects, according to Alistair Fairweather, social media and editorial strategist at Media24 Magazines.

Fairweather was speaking at the My Career as a Social Media Professional, one of a series of Career Awareness Talks at UCT recently. The series, which ends on 22 April, is an annual initiative organised by the Careers Service (CS) in the Centre for Higher Education Development.

It aims to provide students with the opportunity to become more informed about areas of work they do not often hear about through the Graduate Recruitment Programme.

Fairweather spoke about initiating new projects that have not been tested before and whose outcome was thus uncertain. He encouraged students to "think on your feet", and to defend their work to those who have not yet grasped the revolution brought on by social media.

Sharing the stage with him was Dave Duarte, the managing director of Huddlemind, who once was a property agent, ran a restaurant and worked in internet sales before turning to blogging. Maimuna Salie, a career advisor at CDP, believes that Duarte's story proved to students the value of career exploration, keeping an open mind and being flexible about their career development.