Chomsky's contributions speak for themselves 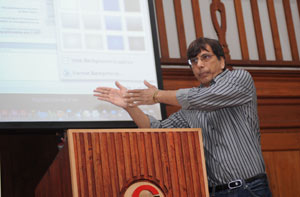 Few can underestimate how Noam Chomsky turned the study of linguistics on its head in the 1950s and 1960s, or underestimate the sway his theories have had on the field for the past 60 years.

So argued Professor Raj Mesthrie - by his own admission no "strict Chomskyan" - in his 22 April public lecture, Syntactic Structures: Noam Chomsky and the colourless green revolution in language studies, the most recent in the Great Texts/Big Questions series of UCT's Gordon Institute for Performing and Creative Arts.

The "Chomskyan revolution", Mesthrie began, started with three of Chomsky's pioneering texts: his first book, the 1957 Syntactic Structures, ("not a great book" but often underappreciated, said Mesthrie); his long review of BF Skinner's Verbal Behaviour in 1959; and Aspects of the Theory of Syntax of 1965.

What made these writings and their impact all the more impressive is that they came in the heydays of structural linguistics, with its focus on the phonetics of languages and the structure of words, and behavioural linguistics, which suggested that language is learned through repetition.

Along, then, came Chomsky, who proposed that humans have a built-in set of linguistic principles that underpinned the acquisition of all languages.

In time, Chomsky's groundbreaking works would influence the psychology of language, child language development, the study of sign language and, critically, the nature versus nurture debate.