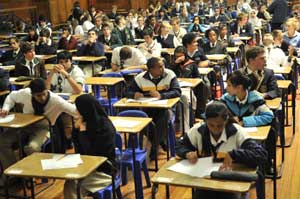 Congestion: Thousands of high school learners are expected to stream onto campus tomorrow for the annual UCT Maths Competition.

The learners will arrive on campus from around 17h00, and will be accompanied by 200 teachers, who have volunteered to help with registration and invigilation.

Heavy traffic congestion is expected on the upper campus until after 21h00.

The competition, which has been an annual campus event since 1980, is aimed at popularising mathematics among high schools in the Western Cape, and identifies promising students and offers them opportunities for further development of their mathematical talents. They will be writing maths papers relevant to their grades from 19h45 to 21h00.

Competition director, Professor John Webb of the Department of Mathematics and Applied Mathematics, said UCT has encouraged schools to bring their learners in school buses, rather than in private cars, as every school bus replaces about 30 private cars. But hundreds, even thousands, of cars are still expected to stream onto the campus.

Traffic officials and security guards will be out in full force to monitor and direct the flow of traffic.