Fashion week ends with a bang 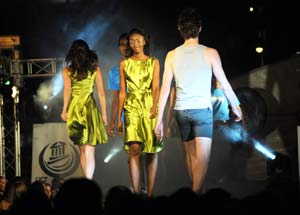 All dressed up: Students hit the catwalk in some glorious outfits at this year's UCT RAG Fashion Show.

The UCT RAG Fashion Week ended on a high note when students-turned-models strutted their stuff along the catwalk at a packed FVT Dining Lounge in Cape Town on 10 April.

A total of 29 models donned local and international designs at the show. UCT student and designer Oliver Strange was named as the winner, and was awarded an internship with Nkhensani Nkosi of Stoned Cherrie. The entire event was sponsored by Peroni.

The show followed on the heels of the UCT RAG Dance-Off, which took place at the Baxter Theatre Hall on 7 April. The dance competition was a platform for aspiring dancers in Cape Town who want to showcase their talent. Uniq dance group won the competition.

About 800 people attended the fashion show, while a further 500 made their way to the after-party.

Watch the video of the RAG Dance off competition.

View the photo album of the RAG fashion show (preferably viewed as a slideshow).