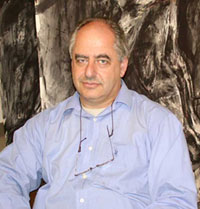 Dark comedy: Artist William Kentridge's GIPCA lecture, Putting the S into Laughter, focused on his recent production of The Nose, composed by Dmitri Shostakovich and based on the short story of the same name by Nikolai Gogol.

Titled Putting the S into Laughter, Kentridge's lecture focused on his recent production, The Nose, a satirical opera composed by Dmitri Shostakovich, based on the short story of the same name by Nikolai Gogol.

Kentridge worked on the opera for three years, producing etchings, drawings, small bronzes, tapestries, films, and a theatrical monologue in which he performed. The production premiered to rave reviews at the Metropolitan Opera in New York on 5 March.

In his lecture, Kentridge explored his re-interpretation of Gogol's absurd, surreal and darkly comical story, written in 1836, and of Shostakovich's music, which was first performed in Leningrad in 1930 before being suppressed and not seen again until 1974. The story follows the adventures of a pompous government official who wakes up one day to find that his nose has left his face and gone walking around St Petersburg - only to become more successful than he is.

As well as the opera, Kentridge also produced an accompanying series of prints to elaborate on the themes explored in the story, now published in the book William Kentridge Nose by David Krut Publishing.

"Part of what GIPCA intends to achieve in South Africa is to highlight interdisciplinary art and make it accessible to a broader audience," said Dr Rob Baum, director of GIPCA. "To host an artist of Kentridge's stature, an artist who has raised the profile of interdisciplinary work to such a level, with so global an effect, and with such joyous imagination, is a great privilege."