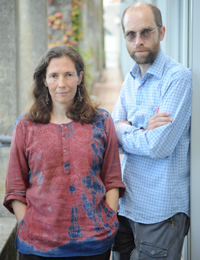 With their recent appearances before the Land Claims Court, two UCT scholars could turn the very tenets of land-claims compensation on their heads, and earn claimants a substantial chunk of extra change.

Professor Nicoli Nattrass and Associate Professor Martin Wittenberg, both of the School of Economics, recently acted as expert witnesses on behalf of land-claims plaintiff Isabel Florence, who is in dispute with the Land Claims Commission. Florence is challenging the commission's offer of R40 000 - a sort of 'opening gambit' from the state - for a family home named Sunnycroft, between Klipfontein Road and the Black River, that was lost in 1970 because of the Group Areas Act. At the time, the Florences received just over R1 000 in compensation for a house valued at about R31 000.

Nattrass and Wittenberg were called upon by Florence's lawyers to propose a fairer compensation amount. But their input went way beyond just the numbers.

According to Wittenberg, who did the initial calculations, there are a number of ways to come up with a rand total. The first is to use the Consumer Price Index (CPI), or headline inflationary rate. Using that measure, the R30 000 owed to the Florences would translate to over R1.2 million today.

But, argues Wittenberg, the CPI is only a means of estimating lost purchasing power. (So, if the Florences had opted to throw a R30 000 party back in 1970, the CPI would calculate what it would cost to stage a soiree of similar size and shape in 2010.)

However, the Florences had not foregone just R30 000 in spending power; instead, they had lost a house and, as such, an asset.

"They were deliberately not blowing their money, but were saving it; and they were saving it because they were expecting a return on it," says Wittenberg. "And that principle is the core issue." Wittenberg therefore argued that the R30 000 owed to the Florences in 1970 should be inflated by an investment rate of return, not the CPI.

The state countered that if it accepts that the Florences had lost an investment, what rate of return should be used to calculate a fair return, as different investments can have many different returns? Wittenberg and Nattrass retorted that the same objection applies to the CPI, which simply averages out a whole range of inflation rates - food inflation, furniture inflation, etc.

The state also tried to argue that using the CPI was a standard, objective measure. Wittenberg and Nattrass responded by pointing out that because the rich account for most of the expenditure in South Africa, the CPI is actually not objective; but is biased towards the rich, and underestimates the higher inflation on items (like food) purchased by the poor. A fairer way to calculate compensation, then, is to find an investment that is (as the expression goes) as safe as a house. Wittenberg proposed a 32-day-notice deposit rate at a bank, which is a short-term savings account that offers reasonable interest but allows the client access to funds at short notice.

Had the Florences put their R30 000 into such an account, it would now be worth over R1.7 million, the value of the Florences' first claim in front of the court.

"Keeping money in the bank is the safest thing you can do, because you're not going to lose the money and you're going to earn some interest, if not a lot."

While Wittenberg considered that an iron-clad position, Nattrass chose to go one step - and about R1.5 million - further, by arguing that the Florences' R30 000 should be inflated by the government bond rate; that is, the rate of return investors in government bonds received over the period.

"I think there's some kind of justice in the notion that the money that government pays its citizens when it borrows money from them should be the amount that it pays the Florences, because it was government policy that forced them out of their house," says Nattrass.

Using the yield on such bonds, Nattrass came up with a value of over R3.3 million, the amount of the Florences' newly-amended claim. For now, the case has been postponed for a few months while the two parties try to reach a settlement. (And, as a similarly-sized house in the area is currently valued at around R2.8 million or thereabouts, there's plenty of middle ground for both.)

If they don't come to an agreement, and the court is obliged to rule and does so in the Florences' favour, Nattrass and Wittenberg's philosophical position - asset versus cash - could well set a precedent for future claims.

"For me, the theory of price indices is a part of economics that is deadly dull," deadpans Wittenberg. "It's only when it comes to a case like this that you see that actually, this stuff matters."

And while it may amount to little more than a side show, the two scholars' reflections on the CPI could also put a dent in that index's much-burnished reputation as an economically sound and unbiased measure of inflation.