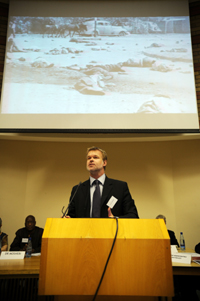 In commemoration of the 50-year anniversary of the Sharpeville massacre of 1960, celebrated as Human Rights day on 21 March, UCT and the University of the Western Cape (UWC) partnered in a round table discussion to reflect on the legacy of this tragic event.

Held at UWC on 23 March and organised by UCT's Democratic Governance and Rights Unit (DGRU) and the Political Studies Department of UWC, the discussion focused on the Sharpeville massacre's impact on current human rights.

"South Africa is approaching a fork in the road," said Professor Richard Calland, director of the DGRU, in introducing the event. "We need caution, not complacency."

Calland also noted that key moments in history, such as the Sharpeville massacre, should be used to see a way forward. "We need to use the past to understand the future."

Buthelezi called the massacre a symbol of oppression. "After Sharpeville, nothing was ever the same–the whole world was outraged by such brutality."

Referring to the recent actions of Julius Malema, Buthelezi slammed the ANC Youth League leader for "singing about death", and engaging in hate speech. "This is one of the worst violations of human rights," he said.

Burton said that at the time, working for the Black Sash was "lonely and discouraging".

"It is remarkable how structural violence was so quickly adopted to support apartheid laws," she said.

Burton also noted that, today, human rights issues are less clear cut, even though the country is yet to achieve the society it wanted. "Most people are still poor and face an ongoing struggle to achieve socioeconomic rights. So for the Black Sash, the struggle continues."

Van der Spuy argued that although the police force had undergone a restructuring in order to enshrine human rights and engage with the communities they serve, there are still serious crises, such as the lack of legitimacy of leadership, corruption and an absence of accountability.

"We must continue to confront our ailments and keep human rights alive," she said.