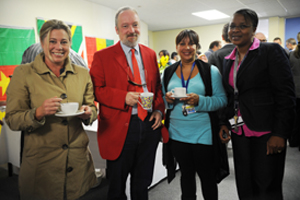 A communiqué from vice-chancellor Dr Max Price to the UCT community on 29 March reports important developments regarding the deanships of four of UCT's six faculties.

Firstly, Professor Don Ross (left) will be taking over as dean of the Faculty of Commerce on 1 June 2010.

Secondly, the terms of office of Professor Paula Ensor (Faculty of Humanities), Professor Marian Jacobs (Faculty of Health Sciences) and Professor Kathy Driver (Faculty of Science) are due to conclude at the end of 2010 or early 2011.

The process for renewal involved extended consultation as well as the requirements of support from faculty boards. Both deans have been appointed on the basis of a strong vote of confidence demonstrated by the members of their respective faculties.

Professor Driver indicated that she did not wish to renew her contract. From January 2011 she will take up a position as a professor in the Department of Mathematics and Applied Mathematics. UCT will immediately begin the process of seeking her successor.

Price said: "I am delighted that we will have a continuation of the energetic leadership of Professors Ensor and Jacobs. We will have an appropriate opportunity towards the end of the year to express our gratitude to Professor Driver for her role as dean but I am delighted that although her deanship will come to an end, her academic talents will not be lost to UCT."