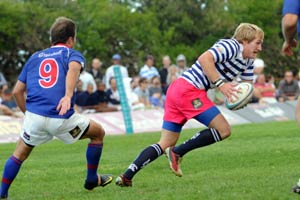 Pink shorts campaign: To show their support and raise money for rugby players living with cancer, every Varsity Cup Player that Rocks (Man of the Match) wears pink shorts in the next game he plays.

After weeks of 'rugby that rocks', the FNB Varsity Cup reaches its climax on 29 March with the highly anticipated final in Stellenbosch between UCT's Ikey Tigers and the University of Stellenbosch's Maties.

A feature of the tournament is the "forward that rocks" and "player that rocks" man of the match awards. Former UCT captain JJ Gagiano has been nominated in both categories.

UCT RAG is also promoting the pink shorts campaign to raise money for rugby players living with cancer. During the course of the tournament every Varsity Cup Player that Rocks (Man of the Match) wears pink shorts in the next game he plays.

Youth Month: Find your passion, says 24-year-old lecturer Clinical anatomist Jeshika Luckrajh is one of UCT’s youngest lecturers. She spoke about her trajectory, a new city and the dynamics of youth and authority. 15 Jun 2021