Connectivity is the answer, says Gandhi 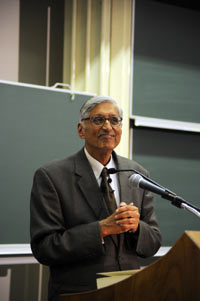 Hand in hand: Prof Rajmohan Gandhi spoke of bringing people closer together in a "coalition of consciousnesses".

If hate, fear and greed are the "real enemies" of humankind, then connectivity between leaders and citizens - and between people - would be one way to overcome our troubles. So said Professor Rajmohan Gandhi, biographer, research professor at the University of Illinois and grandson of Mahatma Gandhi, when he delivered the year's third Vice-Chancellor's Open Lecture at UCT on 23 March.

More often than not, the blame for the world's troubles are pinned on one group or the other, as is happening with Muslims around the world, said Gandhi. But, as he'd learned from his grandfather - at 74, he's accepted that he'll forever be introduced as "Gandhi's grandchild" - and through his decades-long work with Initiatives of Change International (IoCI), which strives to build "relationships across the world's divides", this would be both misleading and dangerous.

Instead, it is hate, fear and greed that divide people, he argued. Only a "coalition of consciousnesses" and a "deeper connectivity" among people would help overcome these divides.

"I think the path to [this connectivity] is listening, listening to the other person," said Gandhi. This lesson would be applicable to South Africa, too.

"Your problems are immense, but they are not really unique," he observed.