Climate Change: How to rise above the noise 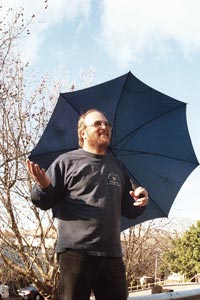 I've been called many things in my life; mostly it has been the typical verbal mudslinging that happens between kids when they're growing up. I thought I had left most of that behind when I became an adult, yet in recent years I've been accused of lying, deception, being unpatriotic and a high priest of climate change - simply for being a climate scientist. Moreover, as a participant in the global community of climate researchers I face repeated accusations that we are shameless liars, conspirators intent on deceiving the public, scam artists, charlatans, twisting the truth for nefarious purposes, and other language far, far worse.

And the message that sparks all this? Well, to use a metaphor, it's as if I said "You're standing in the road and a bus is coming. There's a 9 out of 10 chance you're going to get run over if you don't to get out the way right now". Replace the "bus" with climate, and the "get out the way" with our response on global and regional scales, then that's the message coming from the science. If we don't listen, there's going to be an awful mess and we'll all be in the middle of it!

However, instead of a rational public discussion between thoughtful participants, we mostly see an ugly one-sided diatribe of ad hominem attacks. This is an attempt by some to divert attention from the facts, replacing these with half-truths and distortions that feed the appetite for scandal and dramatic sound-bites in the media.

The forces behind this are varied, and in the western nations one finds well-orchestrated special interest groups sowing doubt in the same way the tobacco lobby tried to say smoking does not cause cancer. But there are a wide range of other motivations as to why some deny that humans are causing significant climate change, not least of which is simply an unwillingness to accept the reality of what's happening...like the proverbial ostrich putting its head in the sand...humans don't like to change!

A major difficulty is that global climate change is just so big a topic! On the one hand it is very simple - we've (indisputably) changed the chemistry of the atmosphere, which changes the energy balance, which changes the dynamics, which changes climate. On the other hand, the climate system is vastly complex, and the explanations rapidly become difficult, if not impossible, to effectively express within the constraints of the public media.

Science has made great strides in gaining understanding of the climate system. Not everything is known, but the primary consequences of human activities are clearly understood. The science is not perfect, but science is self correcting.

Science is not a democracy where truth is decided by opinion, but an activity that progressively uncovers the truth about the world we live in! Each year the knowledge is further refined, the evidence is stronger, and we can now say that it is unequivocal that humans are changing the global climate.

What this means is that if you, the reader, wishes to make an informed assessment of climate change, you have two choices. You can choose to trust a source and simply believe what you're told, or you can take the responsibility on yourself to investigate the evidence. Note I say the evidence; not the emotive hype around "climategate", "amazongate", or any one of the other accusations levelled against the science, each claiming to disprove anthropogenic climate change.

So, where would you start in such an investigation? Certainly one would not begin in the blogosphere...that environment where anyone with an internet connection can claim to be an authoritative voice with their own on-line commentary. The blogosphere is a minefield, filled with plausible sounding rhetoric that's poorly referenced with little justification for the grand claims and emphatic statements, and where the uninformed become trapped in distortions.

It's an interesting observation to note that nearly all online blogs that dispute the reality of climate change are by people without a formal training in climate science, and who are non-active in climate research. There are some good sites I could point you towards that I find trustworthy, but why should you believe me?

Rather I suggest one needs to begin by looking at the actual evidence...what has been observed? Ideally one would get a degree in climate science and go to the thousands of research papers in the formal scientific literature. Of course this is a little impractical for most people! But the scientific literature is generally opaque to the non-expert, and is spread across a vast volume of material that covers multiple lines of evidence.

The information is not found in one easy location. For example, one may read an article about reductions in Arctic sea ice, yet read elsewhere that Antarctic sea ice is increasing, and not find the explanation that both changes are actually fully in accord with the physics of anthropogenic climate change.

Instead I suggest two approaches; first read objective summaries of the evidence, and then consider the half-truths and distortions of the skeptic communities. For the summaries one should begin with those from organisations who have little to gain by promoting a falsehood, and everything to lose if they do.

I'll suggest two of many possible options, one is the Climate Literacy document by the USA National Oceanic and Atmospheric Administration (NOAA). The second is the Frequently Asked Questions (FAQ) from the Intergovernmental Panel on Climate Change (IPCC).

After this, one should consider the problems of the plausible sounding arguments from the skeptics. A wonderful resource for this is by skepticalscience.com, and there's even a free iPhone applet that provides the list of skeptics arguments with detailed explanations of why they fail.

I could go on and overload you with further information. I could try and explain to you about feedback mechanisms and radiation balance, or talk of the CRU email hacks along with various scandals and mistakes, all of which will either confuse or feed the hunger for controversy. That would accomplish little. However, if you're reading this article, that probably means you're curious. And if you're genuinely curious, you're actually a scientist, for that is the trademark of good science when one starts with the remark "Hmmm...that's interesting, I wonder...."

We face today what is arguably the single biggest long term threat to poverty alleviation and development in Africa, and to society generally. As one chooses how to respond one may decide this is just all too much work, and pledge loyalty to the most persuasive (or entertaining) voice that is clamouring for your attention.

One might also decide to pass the responsibility on to some other authority, such as national government. After all, don't we pay taxes for them to (supposedly) look after our interests? But the responsibility is still ultimately ours. If we collectively choose to hide from this, real society change will only happen after the impacts are undeniably experienced across all sectors of society.

At the end of the day it comes back to whether each of us is able to say "I chose this path", and be able to defend that choice. The ball is now in your court! Will our grandchildren say "Thanks!", or "Thanks for nothing..."?