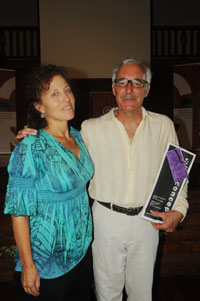 "Table Mountain is Diazapan. First marketed as Valium, it's used for treating anxiety, seizures, insomnia, and restless leg syndrome. Table Mountain possesses anti-convulsant, hypnotic and sedative properties. The side effects of this particular medication called the mountain may include mild euphoria, bored or confused thinking...global disinterestedness - which you find everywhere in Cape Town, light headedness, fainting and erectile dysfunction. Do not use mountain more than once every four hours - sustained use might lead to addiction."

So began the first lecture for the year in the Gordon Institute for Performing and Creative Arts' Great Texts/Big Questions lecture series on 4 March, delivered by philosopher and political commentator Professor Daniel Herwitz.

Currently a Mellon visiting research fellow at UCT, Herwitz is the director of the Institute for the Humanities at the University of Michigan, US, and the author of Star as Icon, about the creation of celebrities from the joint forces of film, television, tabloid and consumer society. He has also written a book of essays about the South African transition, titled Race and Reconciliation.

"The media are now a central if not intrusive part of the American political landscape, and have been since the fatherly fireside chats of President Roosevelt," Herwitz said. "The media formulate canons for debate, in many ways control the flow of information, and turn presidents into celebrities."

Herwitz drew on a wide range of mass media icons to illustrate his observations, comparing Barack Obama with Abraham Lincoln and Grace Kelly with Lady Diana.

"Most American youths get their news from late night comedy programmes, meaning they find news palatable only if presented in the form of personal ad lib and entertainment," he noted. "This elevation of the candidate to celebrity, stardom and talk show intimacy all at once causes the political process to become unpredictable, since no one can control how the public will levitate its candidates, nor whether its feet will remain firmly planted on the ground."

The Great Texts/Big Questions lecture series aims to engender a culture of exchange of ideas, opinion and conjecture. These free hour-long lectures are open to the public, UCT staff and students.

For more information on dates and speakers visit the GIPCA website , or contact Niek de Greef on 021 480 7156 or by email.