Clashing views on role of scientists in global warming 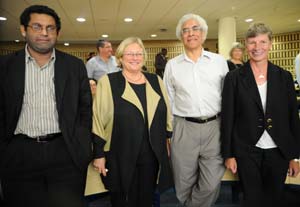 Different perspectives on climate change were aired in a seminar hosted by UCT's African Climate and Development Initiative on 18 March.

Professor George Philander of UCT's Department of Oceanography took on Professor Mary Scoles from the University of the Witwatersrand and Dr Saliem Fakir of the World Wildlife Fund, who responded to his lecture, titled Why Global Warming is Polarising and Paralysing.

Philander noted that according to recent polls, increasing numbers of people were sceptical about global warming. Furthermore, the discussions are becoming more and more polarised. He attributes this to a failure to distinguish between the scientific and ethical aspects of the problem. Uncertainties in the scientific results are either exaggerated, or suppressed to favour inaction or action.

A solution to this problem, Philander proposes, is to get people involved through education about environmental concerns. Our current response to global warming is flawed in being too top-down. Laymen are expected to take, on faith, the alarms scientists are sounding.

Philander argued that, "the future of the planet is far too serious to be left to the scientists - you must come on board."

"The gap between science and laymen can be breached by making laymen own the problem," said Philander. "We need to turn global warming from a threat into an opportunity to promote education, to help people cope with current climate fluctuations such as droughts and floods."

Scoles countered that ethical debates are very much a part of the science agenda, and that meetings between scientists often included ethical debate.

Noting that the South African public is largely not engaged in the debate, Scoles argued for intervention at school level, such as teaching children how to calculate their carbon footprint.

"Scientists are people too," he argued. "They bring their humanity to science, and can politicise their work...Politics is embedded in science."