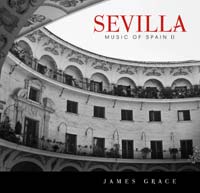 Grace, who is head of classical guitar studies at UCT's South African College of Music, released the album last year under his own record label, Stringwise Records.

It's his fourth solo album. His previous release, Café Latino went to the top of the Classic FM Top 20 chart show and earned Grace a SAMA nomination for Best Instrumental Album.

Grace is currently setting up the Stringwise Young Artist's Trust, which helps young artists from across the country to produce their own albums and offers bursaries for overseas study. The Stringwise Young Artist's Trust recognises, nurtures and promotes young South African musicians at the outset of their careers, through financial assistance with overseas travel, study bursaries and instrument purchase.

Applications for assistance are welcome from any registered, full-time South African students in their third- or fourth-year of music at any South African university. The board of trustees is headed by Grace, the founding trustee, and includes industry executives, media and corporate fundraisers.