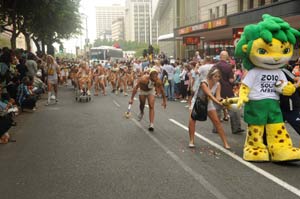 FIFA Soccer World Cup fever took centre stage as spectators thronged Cape Town's Adderley Street on 13 March to join the fun at this year's UCT RAG and Pick 'n Pay Floats Parade. Not only because this year's theme was cirque du 'ole (the celebration of soccer) and that Zakumi, the FIFA 2010 World Cup Mascot, took part, but also because FIFA was among the event sponsors, joining longstanding supporter, Pick 'n Pay and sponsor FNB.

Aliyah Allie, UCT RAG 2010 brand and corporate relations thanked the sponsors and also thanked Colin Rosenburg for allowing them to use his Adderley Street balcony in memory of his uncle, UCT alumnus and Rhodes Scholar Tsvi Brunow.

Although there were only five floats compared to last year's 12, the event was described as "an all-round success", with residences pairing up and hundreds of first-years dancing around the floats. The UCT Ballroom Society, the Hellenic Students' Society, and UCT RAG's sole beneficiary, SHAWCO, also took part.