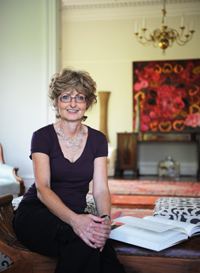 A new interdisciplinary institute straddling the Faculties of Humanities and Law has its eye on some pretty big topics, which will provide the trigger for lively conversation across disciplinary and departmental divides.

The Institute for the Humanities in Africa (HUMA), led by Professor Deborah Posel, has just received the green light from both faculties. It will have three main objectives, Posel explains: to do and champion interdisciplinary research; to help produce South Africa's next generation of scholars - an area that's generally considered to be in some crisis - by creating a convivial intellectual community that welcomes postgraduate membership; and to run initiatives that will bridge the divide between the UCT academy and wider publics in Cape Town.

"We want to do all these things mindful of our positioning in Africa, and of the relationships of connection and disconnection that being African entails - which fits in with UCT's Afropolitan perspective," Posel says.

Posel - based in the Department of Sociology - has raised the funding for establishing the Institute from a number of organisations, notably the Mellon Foundation. (These grants will cover not just her own salary, but also those of four full-time researchers, a writing fellow, and a visiting professorship, among other things.) She also hopes to procure funding for doctoral fellowships.

HUMA's intellectual agenda will be guided by two specific, though broad themes. The first, On Being Human, encompasses enduring questions about our humanity that are central to many scholarly fields and so will encourage that sought-after interdisciplinary input, explains Posel. (Although, she adds with a laugh, "UCT is not going to provide definitive answers to these questions, and certainly not any time soon".)

The second theme will be Circuits of Consumption, tackling the question of consumerism in contemporary society, and our relationship to 'stuff' more generally, here in South Africa and elsewhere.

And while interdisciplinarity is already something of a buzzword at UCT - a sensibility Posel wants to tap into - bringing the Faculty of Law into the equation will be a change of pace in some ways.

"I'm often surprised that law is not considered part of the humanities," Posel says. "Not case law; but the more philosophical and conceptual aspects of the study of law cover some of the same intellectual terrain as the humanities."

Posel's initiative in establishing HUMA will draw on her experience as the founding director of the Wits Institute for Social Economic Research (WISER) at Wits University, which she founded in 2000 and headed until the end of 2008. The UCT institute, however, is the collaborative brainchild of Posel and the Faculty of Humanities, which, explains dean Professor Paula Ensor, had been considering the establishment of such a unit since 2005. Realising that Posel was on the lookout for opportunities in Cape Town following her husband's (vice-chancellor, Dr Max Price) appointment, UCT pounced.

Posel elected not to apply for a university-funded post, preferring to join UCT in an honorary capacity. Her professorship in sociology was therefore approved by a selection committee without advertisement.

"Professor Posel is a leading South African scholar with a formidable international reputation," says Ensor. "Her interests fit brilliantly with our needs, so she is significantly enhancing what we do."

HUMA's work will also dovetail with themes Price has been plugging since he joined UCT, and which are echoed in the university's recently reviewed mission statement - including creating that next generation of intellectuals and scholars, and the reach into other parts of Africa.

"It fits in with the objectives of both the Faculty of Law and the Faculty of Humanities, which had wanted to do these things for a long time now," says deputy vice-chancellor for Research, Professor Danie Visser. "Which is why they were very keen to create the opportunity and the position."

But while HUMA is already a bona fide UCT institute, it may take a while for plaques to be put up and for the institute to open its doors officially. (Offices must be revamped and positions have to be filled, which will take at least a few months.)

That will allow Posel the time to settle in and pen a few papers or - if time allows - a book.