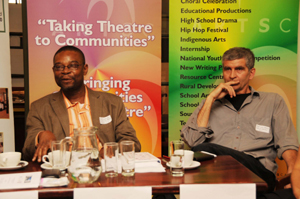 Making history: Attending the Métissages/Mixing Cultures media launch were (from left) Prof Harry Garuba of the Centre for African Studies, and Prof Jean-Louis Cornille of UCT's School of Languages.

No direct English translation for the French word 'métissages' could fully explain the concept, but it could be described as those spaces where blending occurs.

This was the focus of the recent two-day Métissages/Mixing Cultures conference, hosted by UCT's Centre for African Studies and the French section of the School of Languages and Literatures, in partnership with Alliance Francaise, Artscape, and Paris VII University.

The conference featured presentations by researchers from Africa, Asia, Europe, Saudi Arabia and the US, examining cross-cultural encounters from different eras, and deconstructing gender and race stereotypes. South Africa's coloured identity also came under the spotlight.

The conference also served as a platform to introduce the Mitchell's Plain Oral History Project, a partnership between Alliance Française and Artscape, supported by the French Embassy and the Department of Social Development.

Central to the project is the publication of a book, to be launched in 2011, which will unfold the histories - and herstories! - of Mitchell's Plain and its people. The book will recognise those who contributed to the development of this community and inspired many others. The project is also about those who have taken the baton today, to continue developing Mitchell's Plain into a place of hope and possibilities, and to shift people's perceptions of the area as a place of poverty, violence and despair.