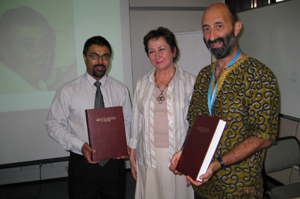 In memory: Dr Lesley Bourne, wife of the late David Bourne, is flanked by Dr Reno Morar, health services adviser to the Dean of the Faculty of Health Sciences, and Prof Leslie London, head of the School of Public Health & Family Medicine at the memorial service of her husband.

David Bourne may have passed on but his legacy will continue through a prize that UCT's School of Public Health and Family Medicine has named in his honour.

The prize, worth R 5000, will be awarded annually to an excelling postgraduate student in the Master of Public Health programme, starting at the end of this year.

"This will help to keep David's legacy alive and remind us of the contribution this extraordinary scientist, demographer, health advocate and general enthusiast for life made to public health in South Africa," said Professor Leslie London, director of the school, at a memorial service held for Bourne this week.

Bourne was a chief research officer at the school, and was a leading demographer and statistician in the field of HIV prevention and its impacts in South Africa. He died suddenly in February last year.

London said Bourne's death left a huge gap in the national capacity to understand the impact of the HIV epidemic, and the opportunities to address prevention.

"As colleagues, we felt it important to honour his legacy and to acknowledge his unstinting willingness to put science ahead of ideology in the fraught world of HIV prevention and treatment in South Africa over the past decade."

This commitment to scientific integrity, London said, often brought Bourne into conflict with authorities who did not like to hear the evidence emerging from the data. "But David was adamant about ensuring that the science should speak for itself."

At the memorial, attended by family, friends and colleagues, a compendium of a selection of his published works (over 130 in total) was presented to his widow, Dr Lesley Bourne. Copies were also given to the dean of the Faculty of Health Sciences and the faculty library.