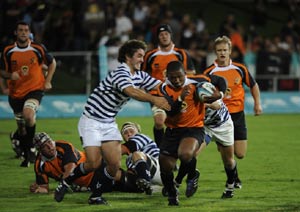 A late Marcello Sampson try helped FNB Ikey Tigers to maintain their unbeaten record in the 2010 Varsity Cup, edging out the FNB University of Johannesburg (UJ) by 30-23 in a classic encounter in Johannesburg on 1 March.

The win will be a confidence booster for the Tigers ahead of their next game against the mighty Maties in Stellenbosch next Monday. It will also stand the UCT side in good stead in their bid for a third successive semi-final spot.

The Ikeys looked the better team in the first half, punishing poor tackling from the home side to take a 17-13 lead at half time.

UJ dominated much of the second half with only penalties keeping the Cape Town side ahead. UJ equalised in the 65th minute, but the Sampson breakaway try and Doug Mallett's conversion gave UCT the advantage again with only seven minutes left on the clock. 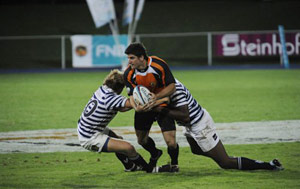 The score from Sampson - the leading try-scorer in the Varsity Cup's three-year history - handed UCT a fourth win of the season and four points on the evening.

In the Steinhof Koshuis Championship, UCT Tornadoes were on the wrong end of a 5-39 scoreline, losing to the Free State University's Vishuis. Tornadoes beat Madibaz of Nelson Mandela Metropolitan University by 38-21 in their first game.