Amid many troubles at schools, there's been progress, says Bloch 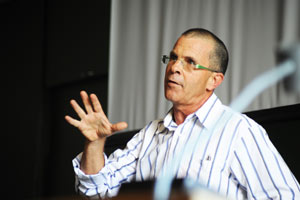 The toxic mix: Such is the scale of the problem that everyone's going to have to chip in to sort out the shortcomings of the South African school system, said Graeme Bloch.

Graeme Bloch admits that he's somewhat "bipolar" when it comes to the South African school system - there are some days when he's convinced that things are moving in the right direction, but there are also others when he's depressed by the sheer scale of the problems.

"There are so many things to do, we could start anywhere," said Bloch, author of 2009's The Toxic Mix: What's wrong with South Africa's schools and how to fix it, speaking at a meeting hosted by UCT's Schools Development Unit on 24 February.

As he does in his book, Bloch, an education specialist with the Development Bank of South Africa (and a member of UCT Council), took his audience through some of the troubles that currently beset the education system. These include ongoing problems with outcomes-based education, the nature - and lack - of teacher support, the public's frustration with teachers' unions, the strained relationship between teachers and the education department (not helped by the repeated postponements of the occupation-specific dispensation for teachers), the need for an inspectorate to check on performance, and the ongoing debate around money and resources.

In addition, there are concerns around outcome (learners' performance) and inequalities (black learners still do worse at schools than their white peers).

That said, there are grounds for some optimism, said Bloch. Yes, there are issues with the qualification, but today more black children complete matric than ever before. So, too, teachers from all walks of life are working together to improve the system. In addition, there are models that can be mimicked: the work of the Bitou 10 Foundation to support learning at 10 Plettenberg Bay schools, or the organisation in Hermanus that draws on professionals in the area to run workshops and the like for schools.

"I think we need to bear in mind that sense of progress, but also the challenges," said Bloch.

It's going to take a concerted effort from many - teachers, government, society - to tackle the problems, he cautioned. "Given the complexity of education... it really is going to be called on all of us to get active."