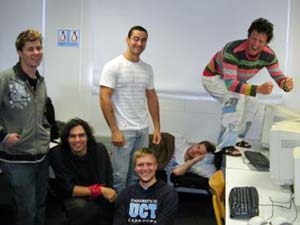 Spacing out: UCT team members work on their game plan at the recent Global Game Jam.

UCT recently hosted the second Global Game Jam (GGJ), which saw its computer science team finish third for the game that they developed.

The event had teams from 38 countries - straddling 23 time zones - go into a lock down, competitors having 48 hours to develop and implement a fully functional computer game.

"It is exciting to see the growth of this event from nine participants last year, to 35 this year," said Dr Patrick Marais, a senior lecturer in the Department of Computer Science and the organiser of the South African leg of the competition. "It is a very positive indicator of games development in South Africa."

The teams survived the two days inside the Computer Science Senior lab by consuming vast amounts of coffee, Coke and pizza. They even brought their sleeping bags along and grabbed a few hours of sleep wherever they could.

Prizes were offered as an incentive at the local event, even though the GGJ is not a competition. The completed games are assessed by the wider internet community who use an approval rating system to come to a final decision. The UCT Department of Computer Science hopes to continue to host the event in the future, and those interested in seeing the developed games can visit the GGJ website.