We say ENOUGH! UCT community to protest the murder of student Dominic Giddy 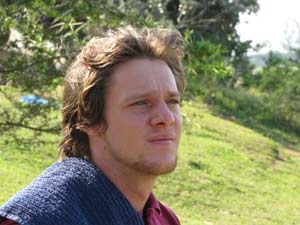 The University of Cape Town is calling on all students, staff and members of the local community to join vice-chancellor Dr Max Price in a march from the Jameson Hall on 22 February to protest the "senseless attack and killing" of UCT student, Dominic Giddy on 13 February.

A memorial assembly in front of the Jameson Hall will precede the march. The assembly will begin at 13h00 and will be addressed by vice-chancellor Dr Max Price and a representative of the Giddy family, among others.

Giddy was the second UCT student to die violently in the past five months and the fourth member of the UCT community to have been murdered in the past three years.

First-year medical student Benny Pakiso Moqobane (19) was shot dead near his digs in Observatory in September 2009. His killers have never been apprehended. Associate professor of science education Kevin Rochford was shot in front of his home in Little Mowbray in 2008. Commercial law professor Mike Larkin was murdered in Rondebosch in November 2007 while walking home in broad daylight. Dr LisbÃ© Smuts, lecturer in School of Languages was murdered at her home in Wellington in 2005.

Vice-chancellor Dr Max Price said: "It is my intention to lead university staff and students in a protest to show our concern and anger at the senseless attack and killing of yet another person."

Giddy, a third-year BSocSc student, was stabbed to death near his Glenres digs. He registered at UCT in 2008 for a BSC in mechanical engineering but changed degree at the start of this year, registering for a bachelor of social science degree.

In a statement Price said: "Our hearts go out to the Giddy family as they face this tragic loss. I spoke with Dominic's father, Mr Patrick Giddy, and offered the condolences of the UCT community. We have offered counselling services to Dominic's family and friends, and to students who wish to avail themselves of help in coming to terms with the loss, the insecurity, and associated anxiety.

"We are also doing all we can to assist the South African Police Services in their hunt for the attackers.

"We spend millions on campus security to safeguard our staff and students against crime, and we have been successful at driving crime down. We are a relatively safe campus, yet our students and staff become victims in the areas around campus where they live. This year we are leading the way in establishing the Groote Schuur Central Improvement District which I hope will reduce crime in the areas bordering on UCT and covering most residences and digs.

We are also beginning a discussion with the SAPS about how we can assist in upgrading the three police stations that serve the UCT community, namely Mowbray, Woodstock and Rondebosch."