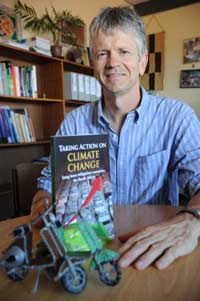 In 2007, Associate Professor Harald Winkler of UCT's Energy Research Centre, colleagues and partners wrapped up a detailed technical report for the Department of Environmental Affairs, a report that painted a series of long-term carbon-emission mitigation scenarios for the country.

This week, Winkler and UCT Press launched a more reader-friendly version of that report in the shape of a peer-reviewed new book, Taking Action on Climate Change - Long-term mitigation scenarios for South Africa. (The book comes with a CD that holds the full technical report.)

The scenarios, based on inputs from government, business and civil society, calculate what would happen if South Africa introduced steps to curb greenhouse-gas emissions, or, the worst-case scenario, chose to do nothing (the 'business-as-usual' scenario, called Growth without Constraints). Thrown in are variables such as energy production, transport-energy demand, vehicle efficiency, demand for energy, industrial emissions, and the use of renewable energy sources, among other things.

The book analyses model results for four strategic options for the country, namely Start Now (invest big money in mitigation now, with savings over time outweighing the initial costs), Scale Up (where mitigation actions are driven by policies and systems of penalties and incentives), Use the Market (getting the market to promote accelerated technologies and social behaviour through a carbon tax and incentives).

A fourth strategy, Reach for the Goal (founded on new technologies, lower-carbon resources, and a transition to a low-carbon economy and society) considers interventions that cannot be modeled yet - but may be critical by 2050. Each strategic option is composed of more detailed mitigation actions.

The country's emission-reduction pledge at the United Nations Climate Change Conference in December 2009 offered hope, says Winkler. There South Africa committed to cut its emissions by 34% - relative to business as usual - by 2020, and by 42% by 2025. Those numbers are by and large based on the long-term mitigation strategies, with some adjustment for near-term electricity plans - particularly the building of coal-fired power stations Medupi and Kusile - even with mitigation commitments.

The pledge is ambitious but achievable, says Winkler.

"That doesn't mean that the options are easy. A lot of them are, I think, challenging, but they can be done."

The book shows clearly, adds Winkler, that South Africa, developing nation or not, can go beyond the negative-cost measures that demand big investments now, but would be a real investment in the future.